Rued Langgaard’s piano cycle Insektarium, which appeared in April 1917, places the composer within the ranks of the pioneers of the extended piano. These miniatures are characterized by both brevity and a reduction of compositional material, and it is noteworthy that Langgaard uses three different kinds of extended piano technique: playing directly on the strings, playing on the body of the piano, and theatrical action.

Individual pieces are titled with the Latin names of insects, and the entire cycle was given the subtitle “Fixerbilleder” (picture puzzles) by Langgaard. The subtitle seems to suggest not only the riddles to solve in recognizing the insects, but also the tension between the musically humorous foreground and the real damaging effects of decay caused by the insects. The construction of the cycle as a musical riddle explains the onomatopoetic and programmatic character of the pieces, which are exaggerated by means of extended piano effects.

In Forficula auricularia a single “crawling” line, which represents the movement of the common earwig, is contrasted with repeated chords. The two contrasting parts are unified by a predominance of diminished fifths or augmented fourths, which sound just as dissonant as they do directionless and desperate.

The second section, titled “crazy” , represents the effects of the insect, which is said to enter the human ear and bore into the brain to lay its eggs, causing pain and insanity. The loss of control is mirrored by the chord repetitions, which increase to an “unbelieveable" tempo and finally can be stopped only by throwing up the arms; the energy of the uncontrolled musical movement is absorbed into a theatrical gesture, and the pose of raised arms visually recalls the pincers of the earwig. 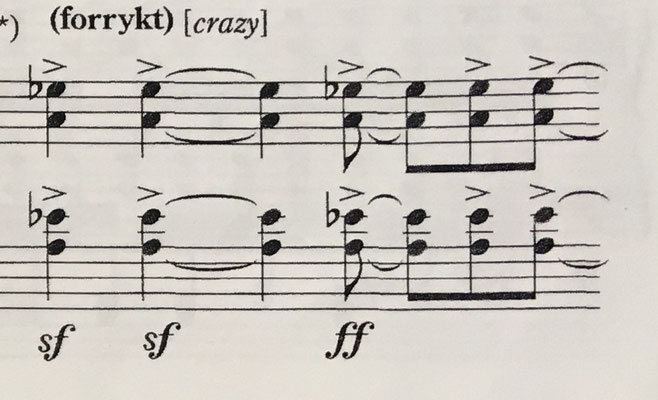 In the slightly varied recapitulation Langgaard gives the instruction to grab the bass strings, though the notation does not clearly indicate whether the strings should be struck or plucked. One could possibly interpret this gesture as a representation of tearing out the earwig, with the sound signifying a bursting skull.

In any case, the extended piano techniques enable the music to cross the border into pure theatrical gesture or the realm of noise.